Diane Keaton: ‘All I Did Was Feed My Hunger’ 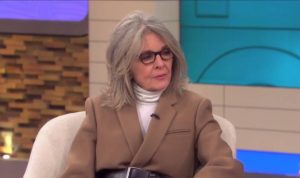 On a recent episode of “The Dr. Oz Show,” Diane Keaton admitted to a four-year battle with bulimia that she described as the lowest point of her life.

The 68-year-old actress details her struggle, which took place in her 20s, in a new book, “Let’s Just Say It Wasn’t Pretty.”

“All I did was feed my hunger. So I was an addict,” she said.

Keaton wrote how her average dinner was fried chicken, french fries, a quart of soda, a couple of TV dinners, “pounds” of candy, cake and banana cream pies.

Keaton describes herself as being an obese person who tricked herself into hiding it.

“When you’re living a lie for four years think about what that does to that four years, it wipes out any growth at all whatsoever.”

Asked how she finally managed to overcome her food addiction, Keaton said that it took a while – but one day she just stopped.

“Somebody mentioned that I seemed to have some mental issues, so I went to an analyst. I would go five days a week. I lied to her for one year.”

As an older woman, Keaton explains that her eating disorder is no longer “relevant,” but that she is relieved to finally speak out about that time.

“I think I’m a sister to all the rest of the women, and I’m sure men as well, who have had some kind of eating disorder, and I’m a part of the team.”