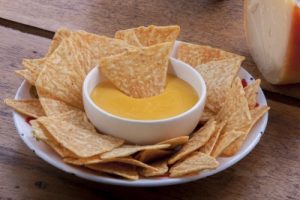 Swimsuit model Chrissy Teigen caused a stir on the Internet recently when she admitted in a delish.com interview that licking the “dust” off of Doritos is one of her hobbies.

“I lick off the nacho cheese seasoning and put the [Doritos] back in the bag,” Teigen said. “You get all the flavor, not all the carbs!”

Quickly after the interview was posted, readers and Twitter users slammed Teigen for promoting a behavior that falls into eating disorder territory.

Teigen also reported she avoids carbohydrates because her face “isn’t the most forgiving of them.”

“Anytime I eat pancakes I feel like such a glutton. Even though I’ll eat the same amount of calories in fried chicken. For some reason it just sits and I feel really gross and mad at myself all day.”

After the backlash, Teigen took to Twitter and defended what she said in the interview.

“I can’t believe I have to address this but my quote about licking the seasoning off Doritos isn’t ‘promoting eating disorders,’ it’s a hobby,” she said.

She then went on to say that licking the seasoning off Doritos isn’t her idea of a diet, calling her accusers “morons.”

“Sorry. You all aren’t morons. Just the people who seriously think I go on Doritos seasoning diets. The rest of you are my everything.”