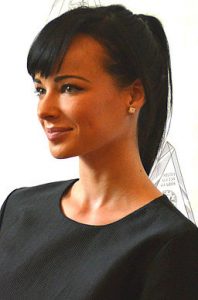 In a recent interview with PEOPLE, the 22-year-old actress revealed her nearly life-long battle with eating disorders – a struggle she says became worse after trying to adapt to the “rampant” eating disorder culture in Hollywood.

“It became a lifestyle choice rather than a disorder,” Rickards said. “You’d go out with your friends all day long, and nobody is like, ‘Why aren’t we eating?’ We’re not eating because we have to have our rib cages showing.”

Rickards said she was a “chubby” kid who struggled with overeating as early as the age of 7 and who still sometimes sees herself as the overweight child who was teased.

“This sort of dysmorphic idea of myself is still in my head,” Rickards said. “I’m still that girl. I still feel like that in a swimsuit.”

‘I didn’t know what was happening’

Recovering didn’t begin until Rickards was hospitalized for what she calls her “monster eating disorder.”

“I purged a lot one day and I got dizzy,” she said. “I didn’t know what was happening. I was shaking and I was sweating. I was cold, and I couldn’t keep anything down. I was nauseous. I thought I was going to pass out, so I called 9-1-1.”

Rickards said she had to be vulnerable and open about her struggles with cast members, as well as work with a therapist and meet others who suffered from eating disorders.

She hopes that her new book, “A Real Guide to Getting it Together Once and For All,” will help other girls who are battling eating disorders.

“I wanted to raise awareness about it because it’s sort of a taboo subject. I don’t want anyone to have to feel alone when they’re in that sort of dark, secretive world.”