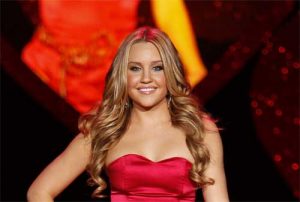 Former Nickelodeon star Amanda Bynes publicly announced on Twitter that she has an eating disorder.

“I have an eating disorder so I have a hard time staying thin,” she wrote on Thursday.

Coming on the heels of other comments she’s publicly made about her weight on social media, the announcement isn’t shocking.

In March, she wrote, “Looking pudgy and I broke my nail,” with a picture of herself in a tight top.

In February, Bynes told her fans that she had lost four pounds since moving to New York and that she currently weighed 121 pounds. Then she surprised them by announcing that her goal weight was 100 pounds.

Her eating disorder reveal comes after she publicly threatened to sue certain media outlets that were portraying her as having a mental illness — Bynes argues that “they take pictures anytime I’ve gained weight then write a fake story.” Two of her targets were Perez Hilton and US Weekly.

“They write a news article about every tweet I write, and I hate the pictures they choose,” she tweeted.

The 26-year-old has been making headlines recently for her strange behavior and her court cases: one for a hit-and-run and another for driving with a suspended license.