One Man Blogs About His Struggles With Bulimia 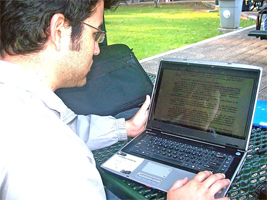 One man opens up and starts a blog to share his story about overcoming bulimia:

“Angelo Henderson never thought taking the “easy way out” would result in his teeth chipping away and hair coming out in clumps.

He thought forcing himself to throw up after eating for 12 years — a condition known as bulimia — was the best way to quickly lose weight.

“It may seem like a quick fix, and you may feel good at the beginning, but 10 years later, your body’s going to suffer those harsh realities,” Henderson said by phone from his Los Angeles home.

Recovering from 12 years of the disorder, Henderson has turned the tables on its taboo nature — which is heightened for men — by detailing his difficult journey.”