What Role Does Oxytocin Play In Binge Eating? 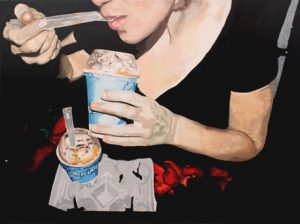 In a study done by York University researcher Caroline Davis and her colleagues at the Centre for Addiction and Mental Health is the first of its kind to demonstrate the variations of the Oxytocin Receptor gene contribute to how some people overeat or engage in episodes of binge eating. The team investigated how the genes influence appetite, food preferences, food intake and personality risk traits associated with brain reward mechanisms. These findings are going to be presented within the next few weeks at the Society for the Study of Ingestive Behavior, the society for the research into all aspects of eating and drinking habits.

Oxytocin is an ancient molecule that is made in the brain and it acts at sites throughout the body by triggering the gene. It influences many survival behaviors including those used for stress management. Dr. Caroline Davis, lead researcher on the study said, “For example, oxytocin enhances prosocial and related behaviors. On the other hand, increases in oxytocin tend to decrease appetite, especially the consumption of sweet carbohydrates.”

Over the past 10 years Davis and her investigators have assessed a large group of participants ranging in age from 27 to 50 years of age. The group had a range of BMIs and included a substantial number of individuals with binge eating disorder habits. Among other measures, the team took blood samples from each participant in order to receive a DNA analysis, the molecules that carry each individual’s unique genetic data.

The DNA information uncovered a new link between oxytocin and the behaviors associated with binge eating. The team focused on seven sites in which the DNA manufactured chemical instructions for making OXTR, which would vary between people. The team collected questionnaires about their participant’s different reward sensitivity, punishment sensitivity, sugar/fat food preferences and overeating habits, to be correlated with genetic information.

The team tested the prediction these SNPs relate to psychological risk factors, which in turn are associated with overeating behaviors. Davis stated, “Three SNPs were significantly related to the psychological traits, which collectively accounted for 37% of the variance in overeating. Another SNP was directly related to overeating. These results support the role of genes in giving rise to traits that regulate behavior and highlight the importance of oxytocin in overeating.”