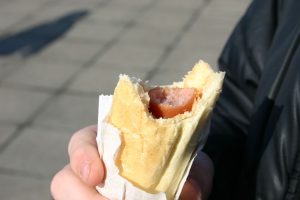 A new research study published in the International Journal of Eating Disorders has determined that although binge eating disorder affects both men and women, a large number of men who suffer from the disorder are not receiving treatment.

The situation is made worse by the lack of research that specifically pertains to men. Up until now, the vast majority of studies have involved female participants.

Researchers believe that men may be less likely than women to ask for treatment. In addition to this, many health care professionals may inadvertently overlook the possibility of binge eating disorder in men, as eating disorders are mistakenly perceived to primarily affect females.

In the study, 21,743 men and 24,608 women participated in a self-assessment health questionnaire screening for obesity, high blood pressure, diabetes, depression, as well as a number of other health conditions. The data revealed that 1,630 men and 2,754 women had experienced at least one episode of binge eating during a one month period of time. Men were also found to be affected by the same health risks related to binge eating as women, and were experiencing similar mental health concerns.

The researchers point out that binge eating is linked to weight gain and obesity, as well as conditions such as hypertension and type 2 diabetes. Incidents of extreme stress and depression are also major concerns for both men and women who suffer from binge eating disorder.

It is hoped that this study will highlight the need to include men in more research studies concerning binge eating disorder. The researchers want to increase awareness among health professionals, of the health risks experienced by men with binge eating disorder in order to provide improved screening and appropriate means of treatment.