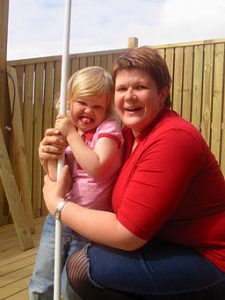 A new study involving more than 440 parents and their preschool aged children offers insight into why some parents who binge eat, may try to restrict their children’s food intake. When a parent restricts a child’s food intake, it places the child at a higher risk of developing unhealthy eating habits and weight issues.

Researchers at the University of Illinois found parents who reported feelings of distress when their child was crying, fearful or angry, were more likely to engage in episodes of binge eating and to limit the amounts or types of food they provided for their child.

In the three months prior the study, 52 parents in the sample reported episodes of binge eating, which ranged in frequency from one to five times per week. Parents also were evaluated for depression, stress, and anxiety and were asked to complete questionnaires about their use of specific feeding practices with their child and their child’s eating habits.

Even though there have been numerous studies that have examined the potentially dangerous effects of restrictive feeding practices on children, the current study was novel in that it focused on the interplay of a parent’s emotions with their controlling the child’s food intake.

Jaclyn A. Saltzman, is the lead study author, as well as a doctoral researcher in human development and family studies and scholar in the Illinois Transdisciplinary Obesity Prevention Program. She states, “Previous research has linked restrictive feeding practices to children’s overeating, eating when they’re not hungry and to higher child body weight, so we know it’s a problem for children’s health.”

She further said, “We know that parental binge eating is related to restrictive feeding, but it’s a counterintuitive relationship. Why is caloric excess in one individual related to caloric restriction in the family? We wanted to explore why that’s happening.”

Parents in the study completed a survey which indicated how they would likely respond to their child’s anger, fear or crying in various different hypothetical situations. Parents were scored on the survey as being supportive or unsupportive, which included feeling distress, minimizing the problem or punishing the child.

Results of the Study

Dr. Saltzman cautioned that because the study was a cross-sectional analysis of the information, the researchers are not able to make a statistical influence that parental binge eating is caused by parental responses to their child’s emotions. However, from a theoretical perspective, that explanation makes the most sense.

She states, “We want researchers and practitioners working with problems around eating and weight to consider how parents’ emotions are being brought to the dining table. Self-regulation is important for emotions, but it’s also important for eating behavior. Many researchers have looked at the interplay of children’s emotions with their eating behaviors. However, parents control the amounts and types of food they feed their children, so you really want to focus on what’s happening with the parents’ emotions, not just what’s happening with the kids.”