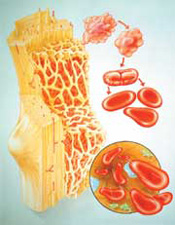 A report form the Children’s Hospital in Boston reported after a study that females (the study participants were all female) with anorexia nervosa have high level of fat cells in their bone marrow.

Forty young women participated in the study twenty of which were diagnosed with anorexia nervosa and twenty who did not have anorexia or any other type of eating disorders they were all declared in good health.

MRI scans of all forty young women were taken. The twenty women with anorexia all had fat cells (in some cases an extremely high number of them) in the knees, thigh and calf area. There bone marrow appeared to be yellow in color symbolizing fat cells inside of the healthy red, which is the color of bone marrow.

“Bone formation is very low in girls with anorexia, and that’s a particular problem because they are growing adolescents who should be maximally forming bones,” says Gordon. “But because of the hormonal alterations induced by malnutrition, the bone marrow stops yielding the needed cells to form bone. Instead the stem cells are pushed toward fat formation.”

Unhealthy bone marrow can lead to serious complications. More studies need to be completed before any specific treatments can be recommended.