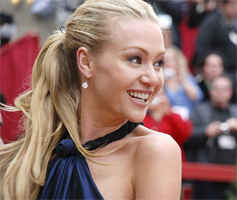 Actress Portia de Rossi opens up about her battle with anorexia:

“It was early in her acting career, but already Portia de Rossi seemed to have it all. The Australian actress, who’d begun her life in the spotlight as a model at age 12, landed a role in 1998 on the hit ABC series “Ally McBeal” at age 25, and was cast in a leading role in a major motion picture only two years later. Tall and slender, with a mane of blond hair, she looked on the outside to have an ideal life.

On the inside, it was anything but.

In 2000, she collapsed on the set of “Who is Cletis Tout?” At 5 feet 8, she weighed 82 pounds, the result of a regimen in which she ate only 300 calories a day and exercised unrelentingly.

She was hiding a secret she thought would ruin her career prospects – that she was a lesbian – and was ashamed of her lie. She thought if she were thinner, she’d be more beautiful, more accepted and more successful.”