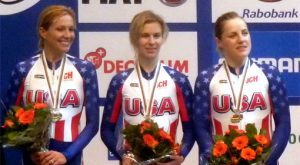 Although Dotsie Bausch is awaiting a formal announcement by USA Cycling in June, it is expected that she will compete in the team pursuit event at the 2012 London Olympic Games.

Bausch, who is now 39 years of age, has come a long way. She didn’t begin cycling until 1998, and unlike most other Olympic athletes, lacked an extensive athletic background during High School and University.

In fact, Bausch originally took up cycling as a means to combat anorexia. During her 20s she suffered from the devastating eating disorder which at one point had her weighing less than 100 pounds; an extremely low weight for someone who is 5 feet 9 inches tall.

A recent article in the Courier-Journal reports that Bausch’s mother remembers her daughter’s 6 year struggle with the eating disorder. She notes that Bausch’s sheer determination and hard work to accomplish any goal she wanted, have contributed to her success. However, it wasn’t always that way.

At an earlier time in her life, Bausch, a former model living in New York City, Philadelphia, and Los Angeles was struggling with a number of self-destructive behaviors. During this time, she was battling anorexia and drug addiction and her future did not look good.

In the late 1990’s Bausch turned to cycling. In a one year period she went from being a beginner to Category 1, and by 2002 was placed on the US National team. Bausch is now a 7 time national champion.

Bausch also received help for her anorexia through a therapist who suggested that she pick a sport that did not have negative connotations involving obsessive exercise. Bausch now trains 25 to 35 hours per week and also mentors other women suffering from eating disorders.

Bausch will travel to Spain next month with teammates Sarah Hammer, Lauren Tamayo, and Jennie Reed to train for the Olympics.