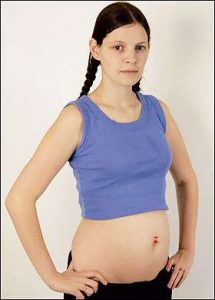 The statement – a woman with anorexia cannot get pregnant is one the biggest myths about anorexia nervosa. In fact a woman who suffers from anorexia is just as likely if not more likely to become than a woman without anorexia.

How the Myth Came About

It is a well know fact that many women with anorexia do not menstruate. Of course, this depends on how severe the anorexia is. Some women who have severe cases almost never have another period until years after treatment. Women with a moderate case of anorexia may menstruate a few months out of each year for very brief periods of time. Women with mild cases still menstruate but not as regularly as before the anorexia and as the condition worsens the periods will become less frequent and irregular.

Even if a woman in the childbearing years does not menstruate or has irregular periods, she still ovulates. Therefore, pregnancy is a very likely possibility. Unless of course the anorexia severe.

Dangers of an Anorexic Pregnancy

Unfortunately, there are several dangers that come with an unplanned anorexic pregnancy. In many cases, the woman has no idea she is even pregnant until she has a miscarriage, experiences pregnancy symptoms (which are often mild.) The dangers associated with an anorexic pregnancy again all depend on how severe the anorexia is. If a woman decides to keep the baby then she has to eat for two for both the mother and baby to be healthy. There is often a high premature delivery rate and infant fatality rate for babies born to anorexic women.