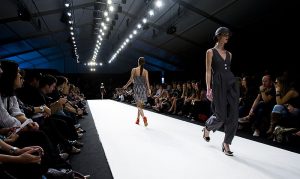 The Israeli parliament has passed legislation which prohibits extremely underweight models from taking part in modelling events such as fashion parades and catwalks, and/or appearing in advertisements.

According to the new rules, a model of either sex must have a body mass index (BMI) of at least 18.5 in order to work. The models will also need to provide proof that a doctor has determined that they are not underweight. The legislation goes even further by stating that models who are actually a healthy weight (although may appear to be underweight) are no longer permitted to appear on catwalks or in advertisements.

Artificial enhancements of images that result in the model looking thinner than before will only be permitted if the alteration or enhancement is clearly stated on the image itself.

The legislation is due to concern over the impact of super-thin models on impressionable young people, and the link between fashion media that promotes unrealistic and unhealthy body images and the prevalence of eating disorders such as anorexia and bulimia.

Models themselves have frequently complained about the pressure to remain extremely thin in order to work in the fashion industry. Models who are severely underweight are often encouraged to maintain an unhealthy weight so that they will experience the most success and win the best contracts in the industry.

The Israeli ban is not the first to take place in the world. Severely underweight models are also prohibited from working in India and Italy. With more countries adopting legislation to ban severely underweight models from appearing in fashion events, there is hope for a healthier representation for young people aspiring to the “ideal” body image.

It is hoped that extremely thin role models in the fashion industry will be replaced by models with a realistic weight and body image.