Biological Basis For Anxiety With Food In Anorexic Women 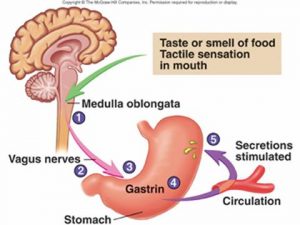 A new study published online in the “International Journal of Eating Disorders,” provides evidence that there may be a biological difference in the brains of anorexic women that explains why they experience anxiety when eating while most normal people experience pleasure.

In the study 10 women who had been in recovery from anorexia for 1 year were compared with 9 normal women as controls. Both groups were given one dose of amphetamine to induce dopamine release in the brain. Dopamine is the neurotransmitter responsible for creating pleasure. The brains of all the women in the study were monitored with positron emission tomography (PET) which was able to show dopamine activity.

In the control population dopamine increased in the ventral striatum and was associated with euphoria. In the recovered anorexic population, dopamine increased in the precommissural dorsal caudate and was associated with feelings of anxiety. The dorsal caudate is the part of the brain related to worrying about the consequences of actions.

This discovery may explain why people with anorexia refuse to eat. Eating releases dopamine which goes to the worry center in the dorsal caudate of the brain instead of to the pleasure center as it does in normal brains. This generates intense feelings of anxiety making anorexics feel better when they refuse food rather than when they eat it.

You can read the abstract of this study from the University of California, San Diego at http://onlinelibrary.wiley.com/doi/10.1002/eat.20937/abstract