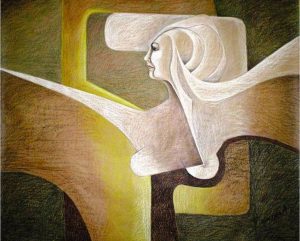 A recent article in the Marietta Daily Journal highlights one woman’s struggle to overcome anorexia nervosa. She has come forward to tell her story in the hope that others may be helped from her experience with the deadly eating disorder.

April Kelley appeared to have a regular life as a happily married woman, foster Mom, and mother of 5 children. She had trained and worked for many years as a registered nurse.

Two years ago, a number of events took place which when added together, created a highly stressful situation. The combination of multiple caregiver roles which included functioning as guardian of a disabled relative, providing foster care and parenting responsibilities, and acting as a full-time caregiver for her dying father left April feeling that her life was beginning to spiral out of control. She quit her nursing job to make herself available for her father during his long illness. April had little time or reserves left to take care of herself and stopped eating as a way to feel “in control” again.

Eventually, her family insisted that April start seeing a therapist in order to address her weight loss and get treatment for her anorexia. By this time, her weight had dropped to 92 pounds and she was critically ill. As well as experiencing severe weight loss, April had other symptoms common to anorexia nervosa such as hair loss, unexplained bruising, heart palpitations, insomnia, and depression.

Fortunately, with the help of her therapist, April is now in recovery from anorexia. She does realize however, that the disorder will always be with her, although controlling her food intake does not have to be the focus of her existence. She likens the daily struggle of anorexia to the vigilance exercised by a recovered alcoholic who must always be aware of slipping back into destructive behavior patterns. April notes that she was not aware at the time, that anorexia can creep up quietly on a person, and that the disorder can happen to anyone.

Her therapist adds that 94 percent of middle aged anorexic women suffered from the disorder during their childhood. Statistics indicate that between 1 and 3 million women between the ages of 30 and 40 are coping with anorexia.