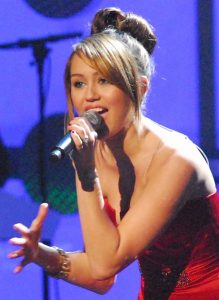 A number of rumors have been circulating recently regarding the possibility that Miley Cyrus is suffering from the devastating eating disorder anorexia nervosa.

The rumors began as a result of Miley Cyrus’s noticeably slimmer appearance. Some fans of the former “Hannah Montana” star had expressed concern that she possibly had an eating disorder. The negative gossip became even more evident following a picture posted by Cyrus on Twitter which showed her breathing deeply into a large bag of Carl’s Jr. Food. A caption printed underneath the picture suggested that the actress was smelling the delicious food because she was unable to eat it.

Miley Cyrus was quick to dismiss the anorexia rumors, stating that the reason she couldn’t eat the food was because she has a gluten and lactose allergy. She posted a number of comments on a popular social media website rejecting any possibility that her diet is related to an eating disorder, stating “it’s not about weight – it’s about health”. Persons close to the actress have reported that she eats healthily and exercises a lot including walking her dog and going to Pilates.

The anorexia rumors do indicate an unfortunate trend in which female celebrities in particular are subjected to overwhelming public scrutiny regarding their appearance. Public opinion on Miley Cyrus’s weight loss has varied from praise and approval at first, to highly negative comments later on.

The situation highlights the current tendency of some media outlets to overly focus on the body image of celebrities, possibly triggering eating disorders among some young people who aspire to be like their role models. The pressure to be thin is also extremely challenging for celebrities who must often endure constant analysis and speculation about their eating habits and weight.