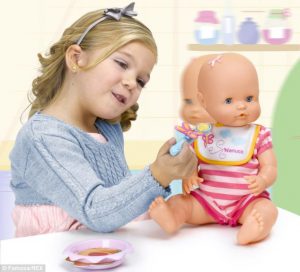 A baby doll that refuses to eat is set to hit store shelves in the United Kingdom next month, but mental health experts are saying the toy could promote unhealthy behaviors and send the wrong message to young girls.

The doll, which is made by Spanish Company Famosa, is called “Nenuco Won’t Eat,” and it was recently introduced at a toy fair. The infant girl doll comes with a plate and plastic spoon, which is magnetized to turn the doll’s head away when food is offered.

Chris Leaman, policy manager at the child and adolescent mental health charity YoungMinds, believes that the doll will encourage unhealthy attitudes about eating and food.

“This doll sends the wrong message to children and encourages them to think that refusing food is normal behavior,” she told The Daily Mail.

Famosa’s marketing director Nikki Jeffrey argues that the doll is just “being mischievous” and that children can relate to it in the same way their parents encourage them to eat.

A spokesperson from UK eating disorder charity Beat concluded: “Research shows young children are becoming aware of body image at a much earlier age. A doll that refuses food is hardly a good example to them.”