A Boy’s Story In Overcoming Anorexia 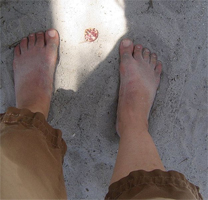 A young boy battled anorexia and overcame it with help:

“n class, Eric Ostendorf fidgeted in his seat and constantly kicked his knees up for exercise. He’d ask to go to the restroom, where he would do 45 chin-ups using the bar between the stall walls.
“Everything I did was with the thought in the back of my head, ‘How can I burn the most calories?’ ” he said.

Instead of savoring food, Eric felt disgusted. He would flush his lunch down the toilet. It was as if a calorie counter had been embedded into his brain, forcing him to estimate how much exercise he needed to burn off every morsel.

Eric’s anorexic habits began when he was 10.
And more children like him are developing eating disorders early, researchers warned this week in a report in the journal Pediatrics.

Between 1999 and 2006, the age group with the sharpest increase of hospitalizations from eating disorders was under 12 years old. The Agency for Healthcare Research and Quality reported a 119 percent rise.

The perception that eating disorders affect only females is wrong, especially for younger kids.”