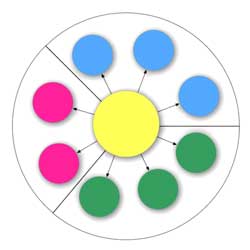 Anorexia Nervosa
Anorexia Nervosa is characterized by the refusal to eat. It can affect anyone of any gender or age but disproportionately affects young women in their late teens and early twenties.
According to the most current edition of the Diagnostic and Statistical Manual of Mental Disorders (DSM-IV) there are four criteria that must be present to achieve a diagnosis of Anorexia Nervosa. First a person must refuse to maintain body weight over a minimal normal weight for age and height or have a failure to make expected weight gain during a defined period of growth, resulting in a body weight 15% lower than expected. Second, the person must experience intense fear of gaining weight or becoming fat, even though underweight. Third, the person must have a disturbance in the way his or her body weight, size, or shape is experienced and also experience undue influence of body weight, or shape on self-evaluation, or denial of the seriousness of the current body weight. Finally, amenorrhea must be present. Amenorrhea is the absence of at least three consecutive menstrual cycles when otherwise expected to occur.
Bulimia Nervosa
Bulimia Nervosa is characterized by cyclical bingeing and purging episodes. Bingeing is defined as the consumption of more food than most other people would eat in a similar circumstance over a discrete period of time accompanied by a sense of lack of control over the food consumption.
Bulimia Nervosa exists when bingeing and compensatory behaviors occur on average 2 times weekly or more for a period of at least 3 months, when the behaviors are not exclusively those of Anorexia Nervosa, and when self-evaluation is unduly influenced by body shape or weight. Those with Bulimia are often very concerned about gaining weight and intensely fear getting fat.
People with Bulimia may engage in a variety of either purging or non-purging behaviors such as vomiting, using laxatives, using diuretics, using enemas, fasting, or exercising excessively. Bulimic bingeing and purging cycles are often conducted in secret because of the shame and disgust associated with the process.
Binge Eating
Binge Eating Disorder (BED) is newly-recognized and is characterized by recurrent episodes of binge eating that occur twice weekly or more for a period of at least six months. During bingeing, a larger than normal amount of food is consumed in a short time frame and the person engaging in the bingeing behavior feels a lack of control over the eating.

In This Article: Orthorexia Nervosa Orthorexia Causes Orthorexia Effects Bratman Test Orthorexia Treatment Recent research indicates a connection between the causes of Orthorexia and obsessive-compulsive disorder. Those suffering from Orthorexia exhibit an obsession with “healthy food” leading the same researchers to connect this obsession as a form of expression for a deeper psychological disorder. Connecting …

In This Article: Orthorexia Orthorexia Causes Orthorexia Effects Bratman Test Orthorexia Treatment Orthorexia Nerovsa is often times confused with Anorexia due to a few shared effects. Most people suffering from Orthorexia display a drive for loss of weight and display that in an overly thin look much the same way as Anorexics. Orthorexics also become …

In This Article: Orthorexia Orthorexia Causes Orthorexia Effects Bratman Test Orthorexia Treatment Treatment for Orthorexia involves a retraining of one’s food consciousness and world outlook. This can be done through therapy or support groups. If the situation is dire then the sufferer is usually admitted into a clinic or treatment center. EatingDisorders.com does not make …

Exercising is a crucial component of any healthy life. An overall healthy lifestyle includes exercise, low stress and tension, a healthy diet, regular doctors and dentist visits, and maintenance of appropriate weight and blood pressure. However, any element of good health that becomes compulsive exercise may have potential to do greater harm than good mentally …