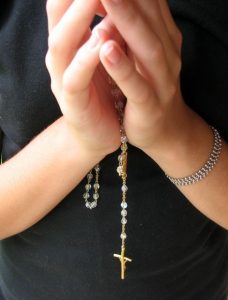 If you are a spiritual person (and not necessarily a religious one), you may be interesting in considering how prayer and other spiritual practices tap into the mind-body connection. They have a calming effect that involves every system in the body, including the nervous system, immune system, endocrine (hormonal) system, digestive system, and cardiovascular system.

One of the most talked-about studies evaluating the positive benefits of prayer was published in The Southern Medical Journal in 1988. It involved 393 hospitalized patients who were equally divided into two groups: one group served as the control and was treated with traditional medical care alone; the second group received prayer along with traditional medical care. Neither group, nor their doctors, knew who was receiving prayer from third parties. The group receiving prayer did significantly better.

I don’t know if any studies that focus on eating disorders and prayer, but the calming effect is a great start.