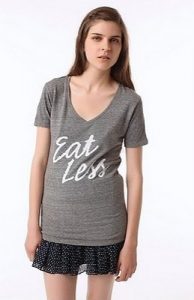 Retailer Urban Outfitters recently debuted a new t-shirt on their website and it’s caused quite a bit of controversy.

The gray t-shirt pictured on the site has “Eat Less” scrawled across the front. The description of the shirt says “Eat less or more or however much you’d like in this seriously soft knit tee cut long and topped with a v-neck.”

Many are saying that the “Eat Less” message of the t-shirt promotes eating disorders, poor body image and low self esteem. Other’s say it’s just a shirt and to lighten up.

Once word of the shirt hit the masses, the backlash began and Urban Outfitters has since pulled the shirt from their website, even though it is still available in stores.

Cleveland Leader: “Perhaps some of the American population could stand to take the shirt’s advice, but for those impressionable teens who shop at Urban Outfitters, it’s message is more pro-anorexia than anything, especially when worn by an emaciated model.”

Here’s what Nerve had to say: “What is the point, really, of wearing a shirt that is at best a grossly over-simplified and potentially unhealthy message about diet and at worst a barely veiled insult aimed at anyone who looks at you? We’re not in eighth grade anymore, Urban Outfitters! I threw out my bratty Hot Topic message t-shirts years ago. I suggest you do the same.