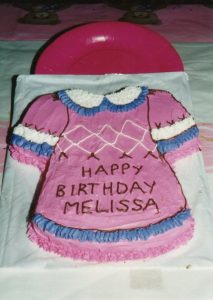 Someday …
I’ll eat breakfast.
I’ll keep a job for more than 3 weeks.
I’ll have a boyfriend for more than 10 days.
I’ll love someone.
I’ll travel wherever I want.
I’ll make my family proud.
I’ll make a movie that changes lives.
So read Melissa Avrin’s journal – a young woman who dyed from bulima last year.
Since someday never happened, her mom is doing what she can to honor the dream to make a film that changes lives.

The film, called “Someday Melissa” and now in the editing stages, has become for Melissa’s mom, a salve, distraction and cause — a way to get the word out to other families grappling with eating disorders that they are not alone; to sound the alarm that eating disorders have the highest mortality rate of any mental illness; to help make sense of the senseless event that was losing her teenage daughter.

Melissa died on May 6, 2009. Cause of death: heart attack due to complications from an eating disorder.

Just a few days before, Melissa learned she had been admitted to Emerson College. The official letter of acceptance arrived a week after she died and sits unopened.