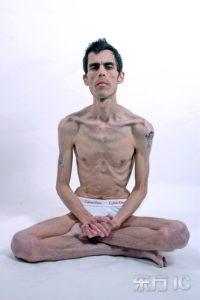 MINNESOTTA, USA: Frail Jeremy Gillitzer is one of the thinnest men in the world after battling extreme anorexia and bulimia for a shocking 25 Years. A decade ago he was widely adored as a successful model with his healthy toned body and bulging biceps. But in a heartbreaking story, Jeremy’s looks have been ravaged by illness leaving him pale, gaunt and almost skeletal. Now weighing six and a half stones, Jeremy, 36, has a fatally low BMI of just 12.æHe says he is disgusted at his own appearance – yet brave Jeremy boldly tells the story of his everyday binge and purge routine in the hope of showing others the shocking reality of his eating disorder. Jeremy, who lives in Minneapolis, Minnesota, started an online blog two years ago as a way of dealing with his loneliness and reaching other sufferers.
PHOTOGRAPHY BY NICK VLCEK / BARCROFT MEDIA LTD
+ 44 (0) 845 370 2233
www.barcroftmedia.com

You may not have ever heard of Jeremy Gillitzer, but if not, you missed knowing about anincredibly neat man. A former model, Jeremy struggled with anorexia for years. He died two weeks ago, a shadow of his former self. Weighing only 68 pounds.

Jeremy may have been an extreme example, but more men than ever are suffering from eating disorders. Earlier this year, Harvard researchers released the results of the first major nationwide mental health survey to include eating disorders. It found that men accounted for 25 percent of anorexia and bulimia cases and a full 40 percent of binge eaters. “These disorders are less common in men, but maybe not quite as rare as we once thought,” says Dr. James I. Hudson, the study’s lead author.

I hesitate to use this photo of Jeremy, for fear it may be triggering. However, because he is now dead, I feel more confident in using it. If he were alive, I would be more afraid of using this image as an ideal. My hope is that the fact that he died will make this more powerful.