Yoga As Treatment For Anorexia Nervosa 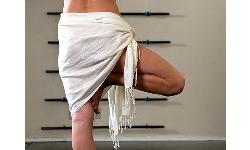 Interest in using yoga as a treatment for anorexia nervosa springs from two observations:

The first was that yoga gave a renewed sense of well-being and acted as a stress reducer.

The second is that, while still a useful exercise, yoga is low-impact and “gentle” compared to traditional western exercise that focuses on building muscle or cardiovascular health.

Anorexics often have a morbid fascination with exercise. Exercise is seen not only as a way to burn calories (and lose further weight) but also as another form of discipline. It is sometimes called anorexia athletica. This isn’t to say exercise is bad, but as an obsession, and linked to altered eating behaviors, it can be. Excessive exercise is one symptom of anorexia.

By decoupling exercise from the calorie-burning and extreme discipline elements, yoga fills the “exercise hole” for anorexics while still giving many benefits. In 2007, Dr. Jennifer J. Daubenmier (and colleagues) published a paper in Sexuality Research and Social Policy that looked at how yoga also improves the body image of practitioners. Since anorexia revolves around body image issues, this last effect may be the most beneficial in anorexia treatment.

Which Kind of Yoga?

Unfortunately, while most types are fine, there are a few emerging yoga styles that mimic the western ideal of “churn and burn” – exactly the opposite of what’s desired. For this reason, it’s no longer possible to lump “yoga” into one box for anorexia treatment. Notably, Bikram yoga is a type to avoid – this gives a comprehensive workout with elements of fitness that aren’t desirable: muscular strength, muscular endurance, cardiovascular flexibility and weight loss. It is also practiced in elevated temperatures for “cleansing purposes.” Anorexics should avoid this type.

Newer yoga and yoga-like styles continue to emerge, and each has to be evaluated on its own merits for anorexia. “Power Yoga” amounts to a yoga-like workout on par with any high-level aerobics class.

The yoga style most effective for anorexia consists of slow, fluid movements, without elevated heat. The discipline element is still there – students are expected to increase flexibility and learn postures – but the calorie burning is secondary.