Negative Effects Of Barbie On Girls 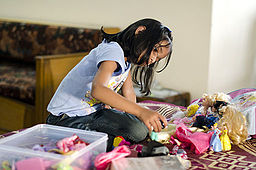 Barbie is a doll manufactured by Mattel, Inc. and she was first launched in March, 1959. For more than fifty years, Barbie has been the subject of controversy and lawsuits. Whether you were cutting off Barbie’s hair or bringing her everywhere you went, one thing is for sure-Barbie was your it girl!

Barbie: Up Close and Personal

According to Penn State, if Barbie were a real woman her neck would be twice as long as and six inches thinner than the average female. She wouldn’t be able to life her own head! Barbie’s waist would be 16-inches in circumference (smaller than her head) and it means her body would only have room for half a liver and a few inches of intestines.

Barbie’s waist-hip ratio would be 0.56, which is exactly 56% of her hip circumference. The average woman has a waist-hip ratio of 0.80. The dolls legs are 50% longer than her arms and her wrists are 3.5 inches, making her completely unable to move or left heavy objects. Finally, Barbie’s feet have 6 inch ankles, meaning she would wear a size three in children’s shoes. With her heavy upper body, Barbie would have an uneven weight distribution and have to walk on all fours.

Still, generations of young girls grow up idolizing Barbie and wanted to be just like her.

In the 1960s, Mattel rode the wave of Barbie’s popularity and introduced a new design called “Slumber Party Barbie.” The doll came complete with a diet book, scale, a hairbrush and sign that said “How to lose weight? Don’t eat”. Even more shockingly, the scale that came with Barbie only went up to 110 pounds-what kind of message did that send to young girls?
No matter how many times Barbie has been redesigned through the years, her dimensions have never once changed!

According to American Psychological Association, 99% of 3-10 year old girls in the United States owns a Barbie doll. Barbie is a cultural icon, there’s no doubt about that, but she’s also responsible for giving young girls an unhealthy idea of body image. In a 2010 Dutch study involving 6-10 year old girls, it was found that those who played with thin dolls, much like Barbie, consumed less food than girls who played with dolls that had a more realistic body shape.

Mattel Inc. never intended to create such controversy with a doll, but it has happened. Barbie has been looked up to as a role model and she’s been vilified for her perfect figure and effervescent smile. She has been long criticized for having an unrealistic appearance and now it seems she’s responsible for making legion of young girls have a negative body image, low self-esteem and according to Oregon State University, it can even cause ambivalence about the future.

For parents with a daughter, it’s important to make sure you praise your daughter, encourage and support her interests and to make sure she never develops an unhealthy and unnatural image of who she truly is.