What Is Rumination Disorder? 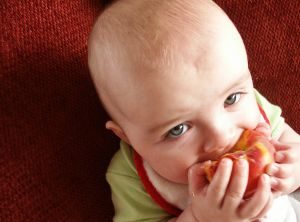 Rumination disorder is an eating disorder in which a person brings back up partially digested food, re-chews it and spits it out. This disorder generally occurs in infants and children. To be considered a disorder, this behavior must occur on a regular basis for at least one month.

Symptoms of rumination disorder often include repeated regurgitation or re-chewing of food, weight loss, bad breath, tooth decay, repeated stomachaches and indigestion, and raw or chapped lips. Infants with this disorder sometimes make unusual movements like straining or arching the back, holding the head back, or tightening the abdominal muscles.

The cause of rumination disorder is unknown, however, there may be several factors that contribute to it. These factors include physical illness, severe stress, neglect and a way to attract attention.

Because many children and infants grow out of rumination disorder, and because adults with this disorder generally are secretive about it, it’s difficult to estimate how many people suffer from the disorder. However, it is considered to be uncommon.

For the most part, this eating disorder occurs in young children and infants between 3 and 12 months old. It often occurs more in boys than girls.

Several things can be done to help a child overcome rumination disorder. Treatment may include simple things such as changing a child’s positing or posture after eating, reducing distractions during feeding or distracting a child when they begin to regurgitate food.

Other forms of treatment may include aversive conditioning, which involves placing sour tasting food on a child’s tongue when she or he begins to vomit. Psychotherapy may be helpful for parents in order to improve communication and address negative feelings toward the child for their behavior.

In many cases, infants and young children simply outgrow the eating disorder and return to eating normally.