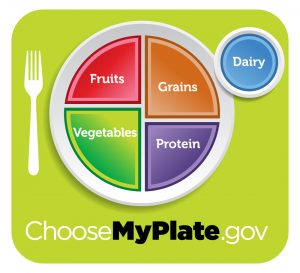 In June 2011, the United States Department of Agriculture (USDA), in conjunction with First Lady Michelle Obama, launched a new generation version of daily food guidelines called MyPlate, which was designed to prompt consumers to think about building a healthy plate of food at mealtime.

MyPlate, which emphasizes the fruit, vegetable, grains, protein and dairy food groups, replaced the USDA’s well-known Food Pyramid Guide that had been in existence since 1992.

The Purpose Behind A New Icon

The MyPlate icon illustrates a plate with the five food groups on a placement that is suggestive of the most appropriate portions of food people should eat at each meal. In particular, MyPlate emphasizes that fruits and vegetables should make up half of a plate at each meal.

The development of MyPlate stemmed from a 2010 report from the White House Childhood Obesity Task Force, which challenged the USDA to design a new symbol as a way to inspire people to choose healthier foods. The goal was to create something simpler and more direct than the existing Food Pyramid Guide at the time.

Through the use of MyPlate, the USDA is encouraging people to make changes to their eating habits in three main areas: