Realize the Value of a Sister 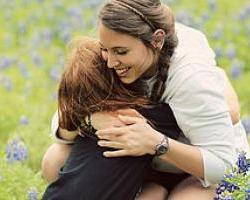 If you have a sister, then you know about the love-hate relationship that can happen. However, no matter what the bond between sisters is very strong and she will always be there for you. Below are a few great things that you will come to understand when you fully realize the value of a sister.

A study that was performed in 2010 found that individuals with a sister are generally kinder and more giving, even if the people fight.
The study looked at 395 families with more than one child, one of who had to be in between the ages of 10 and 14 years of age. The adolescent was provided with a series of questions about their sibling who was closest to them in age, and their answers were videotaped. The following year, the same adolescents were asked to answer the same questions as before, and again where videoed.

The research team discovered it was sisters who had the largest impact on the other sibling when it came to how nice they are. While brothers also have an impact on how a sibling will end up, those who have a sister appear to experience more harmony in life.

It doesn’t matter if your sister is older or younger, having one is a major factor in experiencing more positive emotions. In a study done by Brigham Young University, it was discovered that people who have a sister have less guilt, loneliness and feelings of fear. Interestingly as a person gets older, he or she will also be more likely to speak to their sister about things they may not wish to discuss with their parents.

When you truly realize the value of a sister, you realize her love is like nobody else’s. In the study from Brigham Young, it was also discovered that people who have a sister reported a greater feeling of being loved than those who didn’t have a sister. This was particularly the case for adolescents who are going through a hard time in life.

A Sister Balances Out Your Life

The open lines of communication that happens when someone has a sister means they also give someone a more balanced life. Tony Cassidy, a researcher at the University of Ulster says, “Emotional expression is fundamental to good psychological health.” Sisters are amazing and as you can see from reading scientific research, they bring qualities to enrich and better our lives. Where would you be without your sis?