I Think I Have An Eating Disorder 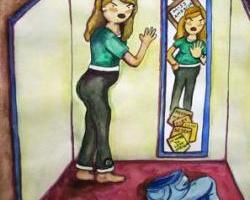 Although the diagnosis of an eating disorder can only be made by a psychologist or other mental health or medical professional, there are warning signs that may indicate disordered eating.

The definition of an eating disorder is psychological condition characterized by irregular eating behavior that is used to satisfy a psychological need rather than a physical need. If you are saying to yourself, “I think I have an eating disorder,” you will need to ask yourself if you use the food-related behavior of concern to manage a feeling that you can’t tolerate. Some feelings that can be difficult to manage include guilt, regret, anger, bitterness, and sadness.

People develop eating disorders because on some level it works for them. Perhaps they experienced trauma and didn’t have the capacity to deal with it when it occurred. Perhaps a person has kept painful secrets or not been able to safely express themself. Perhaps the eating behavior got much-needed attention from loved ones when nothing else did. No one develops an eating disorder without a need.

Although some eating disorders are well-known and characterized such as bulimia or anorexia, eating disorders come on a spectrum and can include many bizzare behaviors. To say to yourself, “I think I have an eating disorder but it doesn’t look like starving myself or vomiting so it must not be one,” may be a form of denial. To think like this may delay proper treatment, endanger your physical and mental health, and increase the time you suffer alone in silence.

If you are saying to yourself, “I think I have an eating disorder,” something is probably distressing in your life right now. Regardless of whether or not you have the diagnosis of a particular eating disorder the issue that is concerning you is still worth investigating. Give yourself the peace of mind you deserve and take proactive action to seek help. Only then can you lessen your burden, obtain the help you desire or need, and get better.