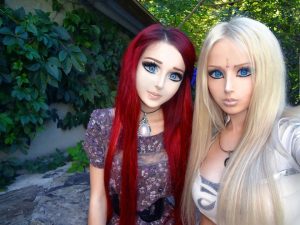 Ukranian women seem to have adopted a very strange fashion trend: using plastic surgery to turn themselves into human dolls.

Valeria Lukyanova has been making international headlines after transforming into a real-life “Barbie” doll, and Anastasiya Shpagina has earned the title of “Anime Girl.”

These young women have undergone extensive plastic surgery to look like dolls and cartoon characters, and the end result is convincing.

Lukyanova, 21, has had a lifetime obsession with Barbie and dedicated her life to looking like her favorite doll. Recently, photos of the impossibly-proportioned Ukranian model have gone viral. Similarly, Anastasiya Shpagina, another Ukranian model from the same town as Valeria, has gone to outrageous lengths to look like a real-life anime character. Her enormous eyes and miniscule waist have turned her into an internet sensation.

The two girls are some of the most famous women on the Russian-speaking internet. Due to extensive surgery to achieve the tiny waist and long legs of a Barbie doll, Lukyanova has had to take on an all-liquid died to maintain her figure.

When asked about the criticism she has received about her plastic surgeries, Valeria told V magazine:

“They dismiss it as something done by surgeons or computer artists… But I don’t take them seriously. I’m even flattered! It’s what success is like. I’m happy I seem unreal to them, it means I’m doing a good job.”

Shpagina relies on makeup rather than plastic surgery to complete her anime look. She lives every day completely in character as “Fukkacumi,” her stage name. She needs a minimum of three hours every morning to do the makeup on her face. She hopes to get plastic surgery to change the shape of her eyes permanently, which is common in Japan, but unheard of in the Ukraine. She also hopes to get her waist surgically reduced, much like Lukyanova, who is one of her role models.

Is this the beginning of a very strange new trend? Valeria Lukyanova certainly thinks so. “Indeed, I’ve noticed a trend,” she told V Magazine.

“Every good-looking woman with fine features and slim figure looks like a doll. I won’t deny that I play along with people’s perceptions. I’m amused by the reactions. I don’t take it seriously.”

You can watch a video about Valeria and Shpagina here.