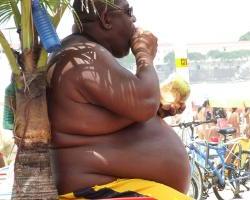 Approximately 60 million people in America today are affected by obesity.

Economic and technological advancements in America have inadvertently resulted in a population that is at times, negatively affected by success. An over abundance of food has actually helped to create an obesity problem which is made worse by sedentary lifestyle choices and a hectic pace of life which encourages the consumption of easily acquired fast food.

Fast food establishments which frequently offer large portion sizes of less nutritional food which is high in fat and sugar, contribute to overeating and obesity. When combined with a lack of intense exercise and physical exertion, the ability to burn off calories is greatly reduced, resulting in weight gain which can lead to obesity.

A person is described as obese when their body mass index (BMI) is over 30. A BMI of over 40 would be considered severely obese. Women have more body fat than men. Over 9 million children in the US over the age of 6 are obese.

The personal and economic cost of obesity in America is considerable. Obese individuals are at high risk of developing type 2 diabetes, high blood pressure, and cardiovascular disease. The cost of treating obesity related illnesses has increased drastically during the past decade, and children who suffer from obesity are susceptible to becoming obese adults.

The US government is working on legislation in order to reduce obesity in America. Fast food restaurants in several cities and states are now required to label the calorie contents of their menus in an attempt to better educate consumers and encourage healthy choices. Other reforms have been applied in schools to work with young people at risk for obesity.