About Famous People With Eating Disorders 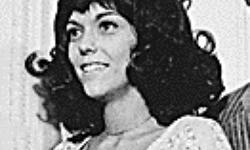 The fact that celebrities are now willing to step forward and share their experiences with eating disorders is a testament to progress in the medical field. Recognition that anorexia, bulimia and binge eating are real medical conditions have taken away some of the shame and stigma that otherwise keep such conditions secret. Here is a partial list of famous people whose eating disorders have become public knowledge.

Anorexia or bulimia is rarely the sole cause of death. Sufferers may commit suicide or overdose on weightloss products or they may die from physical damage done because of the eating disorder. Families may not make the cause of death public or may conceal an associated eating disorder because of shame or to prevent embarrassment of their deceased loved ones. For those reasons, this list is shorter than everyone knows it should be.

Carpenter struggled with anorexia and eventually died after going on a very strict water diet. She lost twenty pounds and continued to lose weight until her death. She died at 32 years of age from heart failure – a consequence of her anorexia. She was reported to weigh 80 pounds at the end of her life.

Terri Schiavo collapsed in her apartment at age 26 and remained in a coma until her death 25 years later. Her collapse was due to an electrolyte imbalance brought on by a combination of bulimia and overconsumption of water. Her doctors were aware of her condition but failed to offer treatment. One note in her medical records read: “She apparently has been trying to keep her weight down with dieting by herself, drinking liquids most of the time during the day and drinking about 10–15 glasses of iced tea.”

Henric, a 22 year old gymnast who tried out for the Olympics, and was denied because of her weight, set out to lose as much as possible. Her anorexia killed her through multiple organ failure. She was admitted to the hospital weighing 47 pounds.

Guenther was a ballet dancer who was judged as being “too fat” at 115 pounds and 5’5” tall. She died at 22 years of age and while the death has not been directly blamed on anorexia, she weighed 93 pounds and was continuing to lose weight.

These celebrities have admitted to struggling with an eating disorder.

This is only a partial listing. An updated list with further details can be found here.

Importantly, these people have a voice in helping the public understand, not only how common eating disorders are, but the serious consequences the disorder entails. By sharing their stories, we can all gain a better perspective on the condition.