Identifying The Signs And Symptoms Of Bulimia 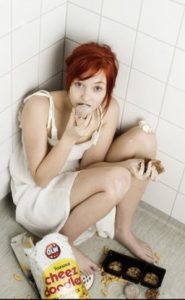 Bulimia nervosa is an eating disorder characterized by binge eating and obsession with weight loss.

The disorder is an overwhelming battle between weight loss and mass consumption of food. Bulimia affects men and women of all ages.

Bulimia can be detected by observing the physical appearance of someone with the eating disorder. Calluses or scars on the knuckles or hands is one of the most prominent signs of a bulimic, since those with the disorder regularly induce vomiting with their fingers or hands. Discolored teeth are also an indication of bulimia, caused by consistent exposure to stomach acid. The exposure may make teeth look yellow, ragged or clear.

One of the less obvious symptoms of bulimia includes average weight. Men and women with bulimia are usually normal weight, with slight fluctuations.

Signs of Binging and Purging

There are a number of distinct signs that indicate a person might be bulimic. Signs of binging include secrecy around eating, eating large amounts of food and alternating between underrating and overeating. Signs of purging include going to the bathroom after meals and the smell of vomit.

Bulimia is characterized by its destructive binging and purging cycle. A person with bulimia will refuse to eat, then binge when the body responds with powerful cravings onset by food deprivation. The result of binging is purging on previously “forbidden” food, and so on.

Purging does not prevent weight gain, which is why most people with bulimia never lose weight and instead gain it. Induced vomiting, laxatives and diuretics are almost entirely ineffective in generating weight loss. Any change in weight is due to loss of “water weight”, not true weight loss.