Diabulimia? What is it? 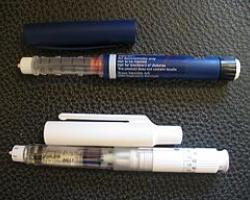 Have you ever heard of the term “diabulimia:”? If you are like many people you probably have limited knowledge of the term, but please read on to find out more about this eating disorder which may affect those with Type 1 diabetes.

Diabulimia is a reduction of insulin intake and it’s done in order to lose weight. It is considered to be a dual diagnosis disorder because the sufferer will have an eating disorder that’s present with diabetes.
People with diabulimia will deliberately take less insulin than needed for the purpose of weight loss. It is not currently recognized as a formal diagnosis by the medical or psychiatric communities, but it is a genuine condition that many people with diabetes suffer from.

What are the Health Risks?

There are many health risks associated with diabulimia and these include; exhaustion, cloudy thinking, glucose in the urine, increased thirst, muscle loss, bacterial skin infections, yeast infections and much more.

What are the Long-Term Effects?

In a person with Type 1 diabetes who has diabulimia for a long period of time, the effects can become life-threatening. There are many things that can result from long-term diabulimia and these include; kidney damage, severe nerve damage to the hands and feet, edema, high cholesterol, heart issues, osteoporosis and death.

Many times people with diabetes Type 1 who omit insulin injections have already been diagnosed with an eating disorder such as bulimia or anorexia. These individuals are often unaware that diabulimia is much more common and is harder to overcome. Unlike anorexia and bulimia, this condition can sometimes require a person to stop taking care of their diabetes. Unlike vomiting or starving themselves, diabulimia can be a more appealing option for weight loss.

Many scientific studies and research papers have concluded that diabetic females have a higher body mass index than women who do not have the disease. Girls and young women with a higher body mass index are also shown to be more likely to suffer from an eating disorder. Many scientific articles have been published that show preteen and teenage girls with Type 1 diabetes have a higher rate of eating disorders of all kinds, than girls without diabetes do.

This horrifying condition can be exacerbated by the need for a diabetic to constantly exercise constant willpower in regards to food intake, dietary choices, and body weight and glycemic control. In adolescent females, increased weight gain that can result from insulin treatment may play an important role in increasing the risk of anorexia nervosa and/or bulimia nervosa, but more study is needed to allow researchers a better understanding of everything that’s involved.