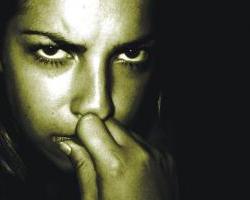 The term “bulimia cheeks” refers to the appearance of swollen, enlarged cheeks that may be observed in someone who has bulimia. The condition is sometimes described as “chipmunk cheeks”.

The puffiness in the cheeks is caused by inflammation of parotid tissue, and swelling in the parotid glands (the largest of the salivary glands). The parotid gland is located in the back of the mouth. It is not usually visible unless seriously inflamed. Normally, the function of the parotid gland is to secrete saliva into the mouth in order to assist with chewing, swallowing, and digesting food.

When someone with bulimia purges through constant self-induced vomiting, these glands become irritated and sore. The amount of swelling is dependent upon the number of times the bulimic purges. The cheeks will remain swollen and enlarged until the purging behavior stops. It may take several weeks for the swelling to go down completely after the purging ceases.

It is quite disheartening for someone who is obsessed with body image and thinness, to realize that swollen, rounded cheeks are a result of their eating disorder.

On the other hand, puffy, swollen cheeks are one of the symptoms that a physician might use, in order to screen for an eating disorder. Many bulimics are extremely good at hiding their eating disorder, so it is helpful to be able to identify any physical signs that might suggest that a person is struggling with bulimia.

Professional treatment is necessary for anyone with bulimia in order to break the cycle of overeating and purging that is a part of this serious disorder.