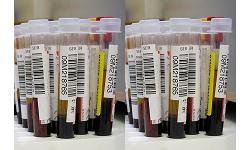 There are several blood tests that can support a diagnosis of bulimia, but none will give a firm diagnosis on their own.

The reason for this is that the lack of nutrients leading to the abnormalities can come from other diseases. Furthermore, someone may be bulimic and still be getting enough nutrition to mask the signs we would expect to see in blood work.

Bearing those restrictions in mind, here is what a doctor will look at to help confirm a diagnosis of bulimia:

The two most common things that show up in bulimics are electrolyte imbalances and changes in the acidity of the blood. The first of these is most often due to a lack of potassium being absorbed from food. Like other deficiencies, this happens when a bulimic purges stomach contents before the food has a chance to make it into the lower intestine.

A fall in potassium can happen quite quickly, and is also a sign of dehydration. On the other hand, a bulimic who hasn’t purged in awhile can quickly restore normal levels, making this sometimes difficult to detect. This is one type of electrolyte imbalance that can show up in a blood test.

The second common value that is off in bulimics is the acid-base balance in the blood. This is also related to mineral depletion and, like potassium deficiency, may not show up until significant body stores of minerals are missing.

Since bulimia is a type of willful starvation, malnourishment can be detected in the blood. Doctors still have to differentiate this from other possible causes, like a malabsorption syndrome, but those who have been purging for some time will eventually show vitamin deficiencies and the consequences.

* Anemias are less than normal amounts of various blood cells, commonly caused in bulimics by iron or folic acid deficiency.

* Protein deficiencies will show up in a blood test and the causes are the same – not enough intake of protein in the diet. Specific protein deficiency tests are more specialized and not usually run routinely.

* Uric acid can be increased when muscles are being digested by the body to obtain missing protein.

* Glucose abnormalities will show up as low blood sugar levels, again from the lack of obtaining enough calories.

Some concerned parents may ask a physician to look for signs of an eating disorder in their child’s blood work, usually because they suspect bulimia but don’t know how to bring up the subject with their child.

If this is the case, there are other signs a physician can observe, including physical signs and a urinalysis. However, a diagnosis of bulimia will always include an interview with the patient about eating habits and feelings. Many will admit in private to a doctor that they have a problem, at least to some degree.