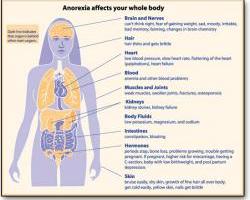 The lanugo defnition comes from the Latin word for “down” such as the small hairlike projections on plants. The medical lanugo definition describes fine, downy, delicate hair commonly referred to as “peach fuzz.”

Lanugo is normally found on fetuses as they develop but by a gestational age of 33 to 36 weeks it is generally replaced by vellus hair.

Lanugo grows as a physiological response to the body’s inability to maintain it’s body temperature. In anorexics, the body loses so much fat that it is unable to stay warm. Lanugo grows as a way to keep heat in before it dissapates, acting as a blanket.

Lanugo may be one symptom in a constellation of abnormalities present in some anorexics. It does not appear in all anorexic patients and will be most likely to appear in cachexic, emaciated patients. It generally grows on the arms and chest or other areas where hair does not grow.