How To Recognize The Signs Of Anorexia In Boys 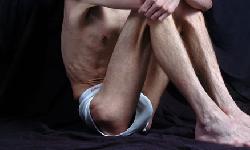 Since nine out of 10 diagnosed anorexics are female, less attention is given to another demographic: males who develop the disease. According to the National Eating Disorders Association, about 1 million young men in the U.S. suffer from anorexia – a conservative estimate, since fewer males seek treatment for eating disorders than females.

Signs of Anorexia in Males

The signs of anorexia in males are similar to those in females, except they may be expressed differently. For example, while a female might be concerned with waist or thigh measurements and overall weight, a male may focus on getting some particular muscle group to show through, “rock-hard abs” being a common one. Both sexes are trying to alter their bodies to some ideal, but the male version revolves around losing body fat to promote a muscular look, rather than overall weight loss.

Distorted body image  — Frequent weighing, narcissistic behavior, comments about being too fat, out of shape or others that are obviously false.

Preoccupation with food or calories — this can be supplements or calorie count or obsessive concern about a diet plan.

Fear about gaining weight — this can be overall weight or focused on “fat weight” verses muscle mass.

Perfectionism — uses weight and body image as a way to feel better about other problems and seems intolerant of slip-ups.

One of the main differences between anorexia in boys and in girls is the isolation. Girls are more likely to share their “successes” and talk about diets/exercise, while boys often exhibit withdrawal and social isolation. They may feel they aren’t good enough yet to merit social interaction.