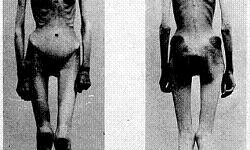 Anorexia means “not eating.” The eating disorder where people willfully stop eating (instead of from a surgery or cancer or other physical illness) is properly called anorexia nervosa. The “nervosa” part refers to the psychological basis.

It’s also not necessarily about starving oneself. Excessive exercise, laxatives and other measure can be used so that even though food is taken in, it isn’t enough to maintain weight. The condition also isn’t primarily about food, although we call it an eating disorder. The genesis of the behavior seems to be about linking weight to feelings of self esteem, often fed by a sense of control that comes from being able to abstain from eating when tempted. For some, there’s an element of perfectionism. Others modify their eating behaviors when under stress or to combat anxiety. In short, “The world around me is going to hell, but I can feel better about myself by taking control over my body and its urges.”

Understanding the basis for the disease gives us insight into anorexia treatment. The target is the person as much as the medical necessity of taking in enough calories to survive. It’s not as simple as just forcing food on someone, although a diet plan will be part of the overall treatment package. The real goal is to address the underlying misperceptions, anxieties, depression, or inappropriate response to stress – that’s where long term improvement comes from.

Unwanted eating behaviors are associated with females more than males, younger people more than older and there seems to be a genetic component that isn’t well understood. Episodes are triggered under transitional stress, as with moving, body changes during adolescence and when involved in an important activity that requires weight management (sports, acting, dance, others). There also seems to be a role played by pressures to reach a certain body style. These messages come from social cues, media and even other family members.

Because anorexia nervosa is seen as an inappropriate response to real life events and personality, sufferers have to be taught new methods of responding that don’t involve this dangerous, life threatening behavior. Successful management is then leveraged into a new set of positive habits. Treatment is very effective once it gets going. Unfortunately, many will hide the behavior, either because they are ashamed or they wish to continue and don’t want to get caught.

This latter consideration is particularly frustrating. Many anorectics don’t see anything wrong and believe they are healthy. It sometimes takes a crisis and hospitalization to convince them. Some suffer reoccurring episodes for their entire lives.