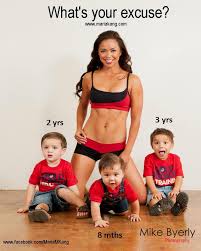 ‘Fit Mom’ Maria Kang is getting heaps of attention across the country for speaking up about obesity – or is she just famous for her candid fat-shaming?

The issue is a divided one, after the 33-year-old health and fitness advocate posted a photo in September that showcased her fit, well-chiseled body, along with her three children. “What’s your excuse?” was the caption, causing the photo to go viral and putting Kang under fire for what some are saying is a judgmental attitude about how women should look after giving birth.

Yet Kang’s supporters say that she’s the “voice of reason” in a country where obesity continues to plague hundreds of thousands of people – and the health problems associated with being overweight are costing our nation a pretty penny.

More recently, Kang had a public debate with Chrystal Bougon, owner of Curvy Girl Lingerie – a company that encourages “regular” women to bare it all and take pride in their bigger bodies.

The popular and unrelenting support received to those who are borderline obese (not just 30 to 40 pounds overweight) frustrates me as a fitness advocate who intimately understands how poor health negatively effects a family, a community and a nation.

Facebook ended up banning Kang from using her account for 48 hours and removed her post (after complaints that her words were “hate speech”), but later retracted the removal, saying that it was a mistake.

Can you be healthy and overweight?

Bougon and Kang took to CNN, where they shared their opposing views on body image and health. Bougon argued that women of all sizes ought to be able to accept themselves – and that being overweight doesn’t necessarily mean a person is medically unhealthy. Kang, on the other hand, believes that while self-acceptance is key, so is solving the obesity epidemic.

“All of the women they showed [in the lingere ads] were obese and I said that was not healthy,” Kang said. “The problem is, we are normalizing what people should look like; overweight and obese. We can’t normalize this and that’s my problem with it. You are sending the message that being obese is OK.”

Bougon said she is less interested in battling Kang on the issue and more interested in helping plus-sized women find self-love and appreciation of their own bodies.

“I believe all bodies are imperfectly perfect,” she said.

The Silicon Valley Business Journal reports that Bougon’s lingerie shop in San Jose, Calif., saw a huge spike in sales after the national controversy broke out.