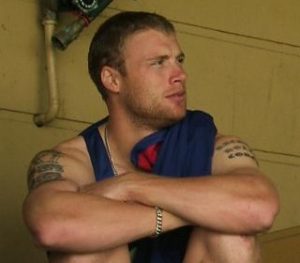 Former cricket player and now boxer Andrew Flintoff admits that, despite his athletic achievements, he hasn’t always been healthy.

In a documentary to be aired next week, Flintoff opens up for the first time about his eating disorder–one that included persistent bouts of purging. The 34-year-old says his struggles stemmed from a self-consciousness about his body.

“I would stick my fingers down my throat to make myself sick,” Flintoff said. “Even after I had gone to good restaurants I would do it. I ended up losing about 15 kilograms. It became a very difficult habit to shake myself out of.”

Battling demons in the ring

Later this month, Flintoff is set to fight against undefeated heavyweight champion Richard Dawson. He says the move is not a publicity stunt–which many people are saying, given that Flintoff doesn’t realistically stand a chance against Dawson–but that it will allow him to face some of his childhood demons on account of being bullied.

“I had a very rough time at school. I wanted to play cricket and I frequently got knocked around because of it. I really wanted to retaliate but for some reason I couldn’t make myself. So I want to put that side of my life to bed a little bit.”

Earlier this year, Flintoff was interviewed in a BBC special where he unloaded about his struggles with depression. But the boxer now says he has a better grasp on his diet and eating habits.

“Once I would have dipped into my kids’ meals for fish fingers, chips and beans,” he said. “Now I have to make myself eat steak at 6am.”

A spokesperson for the National Centre for Eating Disorders confirms that men can struggle with bulimia, too, especially if they suffer from poor self-esteem or poor body-image issues–Flintoff will talk more about the latter in his documentary, airing November 22.