Olympic Athletes Among Those At Increased Risk For Eating Disorders 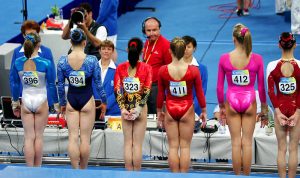 Olympic athletes are among those elite athletes at increased risk for eating disorders.

While many people around the world enjoy watching the Olympic games events, some former Olympians are reminding the public that the pressure to be the fastest and the best, can result in some athletes developing eating disorders in order to appear competitive.

One in five elite female athletes suffers from eating disorders

One in five elite female athletes suffers from eating disorders according to statistics from the Eating Healthy Alliance. In addition to this, as many as one in four women in their late teens or early twenties may use binging and purging as a means to control their weight.

Whitney Post is a former world champion and Olympics alternate rower. She is currently president of the Eating Healthy Alliance. Whitney states that for 15 years she struggled with bulimia, an eating disorder that she believes coincided with her rowing career. She shares her experience in the hope of increasing public recognition of the serious nature of eating disorders among athletes, and reducing the stigma.

Overwhelming pressure to be thin

Some Olympic athletes reportedly blame public pressure to “look the part” of a competitive Olympian as one of the factors contributing to the number of athletes battling eating disorders. The competitive nature of elite level sport also impacts athletes who may be vulnerable to using extreme measures to be the best.

However, as more athletes come forward about the dangers of eating disorders, it is hoped that awareness will replace guilt and shame. Swimmer Amanda Beard, gymnast Nadia Comaneci, and skater Nancy Kerrigan are just a few athletes who have identified as struggling with eating disorders in order to be competitive.

Ultimately, an eating disorder will negatively affect the health and well being of an athlete and contribute to serious health problems. Athletes who struggle with eating disorders experience less overall energy, and stand a greater risk for acquiring an injury. They also require a longer recovery time when injured. In the long-term, an eating disorder can disrupt fertility.

Whitney Post considers herself to be fully recovered from bulimia. She stresses the importance of getting help as soon as possible for an eating disorder, as the longer it persists the more difficult it is to treat.