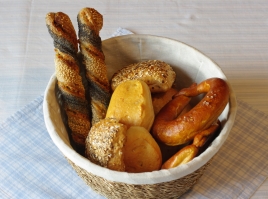 Everyone from Oprah to Dr. Oz has touted the benefits of a gluten-free diet.

And while eliminating gluten from your meals was once a tactic strictly reserved for those with life-threatening Celiac disease, it’s now being promoted as a viable option for those who may be “non-Celiac gluten sensitive” — those who suffer from digestive issues, endometriosis, eczema, anxiety and a host of other ailments.

But some medical experts claim that hopping on the gluten-free train could be an indicator of a bigger problem, such as an eating disorder.

Elimination diets — those that restrict entire food groups — might also be a way for a disordered eater to gain more control over what he or she is consuming. In the case of ditching gluten, many people have adopted the diet after books like Wheat Belly asserted that extreme weight loss often follows the elimination of wheat and gluten-containing foods.

“People read these articles on gluten and think this might be the answers to the problems they may have,” writes rheumatologist Dr. Mark Borigini in an article for Psychology Today.

In an article published in XO Jane, Annakeara Stinson of New York says that her gluten-free diet was veiling a place where she stored her “emotional baggage” and eating obsessions:

“From the outside, people just thought I had allergy issues, but really, it veiled all these other things that were going on … I remember thinking if I were to let go and start eating wheat again that I would balloon.”

Others, however, say that going gluten free can often solve a variety of health problems, leading to clearer skin, less brain “fog,” fewer digestive upsets and reduced inflammation. Dr. William Davis, author of Wheat Belly, notes that about 30 percent of the U.S. population has some form of gluten sensitivity or intolerance but that most people aren’t even aware of it. He writes:

I recognize that declaring wheat a malicious food is like declaring that Ronald Reagan was a Communist. It may seem absurd, even unpatriotic, to demote an iconic dietary staple to the status of public health hazard. But I will make the case that the world’s most popular grain is also the world’s most destructive dietary ingredient.

Davis asserts that the wheat of today is so genetically modified that it’s nearly impossible for most human beings to digest it without adverse bodily reactions. These reactions, he says, result in vague symptoms that are often falsely attributed to other conditions.

Barbara Mendez, a nutritional consultant in New York, says that she recommends gluten-free diets to her patients to help remedy inflammatory-related conditions, which include things like IBS, allergies, high blood pressure or obesity. However, she notes the importance of watching out for disordered eaters and advises using a gluten-free diet as a cure, not a restrictive punishment.

“If there is a suspicion of disordered eating then it must be addressed before making any changes to a person’s diet,” Mendez notes.