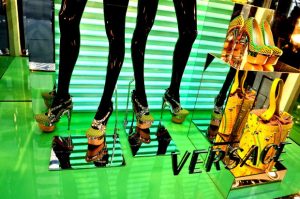 She’s currently a judge on “America’s Next Top Model,” but she doesn’t seem to share the same progressive ideas about body diversity that the show’s creator, Tyra Banks, tries to promote.

In a recent interview with The Fashion Spot, Cutrone blames consumers for the fact that models are too thin.

“Society has a hyper emphasis on thin and that trend comes from the consumers — it does not come from the fashion industry,” she stated.

Cutrone goes on to say that if people wanted a “300-pound purple person,” that fashion would be the first industry to give it to them. Citing the Dove campaigns that use fuller-figured models, Cutrone says that such ads aren’t effective because the predominant theme in fashion is one still centered around being thin.

But please, be busty

Contradicting herself in the same interview, however, Cutrone states that swimwear models have to be bustier in order to sell clothes, because a girl who is a size 34A or 34B won’t get hired to do a fashion shoot.

“So for swim, a girl who’s more curvy or more busty, a 34C — a full C — that’s really what we look for. Someone with ample curves.”

Body type isn’t the only thing Cutrone slams in the interview, either. She goes on to say that models over the age of 26 or 29 shouldn’t even try to work nationally, and that models who are under 5’6″ should “just stay home.”

Is Cutrone being harsh or just honest? She claims the latter.

“These are the things no one ever wants to say, because they’re mean, but it’s true. ”