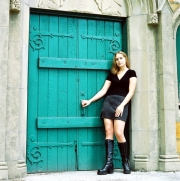 Anorexics tend to unconsciously alter their natural body movements when entering doorways due to feeling bigger than they are, a new study reveals.

The research, from Utrecht University in the Netherlands, suggests that anorexics don’t just exhibit mental and emotional symptoms, but that the way they physically act in everyday situations can be altered, too.

For the study, researchers watched how 39 women walked through a doorway, recording at what point the women turned their shoulders to fit through the opening of the door frame. There were 13 women in the study with anorexia nervosa, 6 with unspecified eating disorders and 20 healthy control subjects.

Anorexia nervosa patients experiencing their body as fat goes beyond thinking and perceiving themselves in such a way, it is even reflected in how they move around in the world. This indicates that the disturbed experience of body size in anorexia nervosa is more pervasive than previously assumed.

Professor Tracey Wade, Dean of the School of Psychology at Flinders University, said that the findings are consistent with how most anorexics feel.

“They feel that they take up too much space in the world, more than they have a right to, and that they feel they need to get smaller and take up less space, that they deserve less space,” she told The Conversation.

Anouk Keizer, lead author of the study, said the findings indicate a need for anorexia treatment to target not just thoughts and feelings about the body, but how the body inhabits space in the world and the patient’s environment.

“Current therapeutic interventions should not only focus on changing how patients think about their body and how they look at it, but also target the body in action,” Keizer said in a press release. “In other words, treatment should aim to improve the experience of body size as a whole.”

Results of the study are published in the journal PLOS ONE.