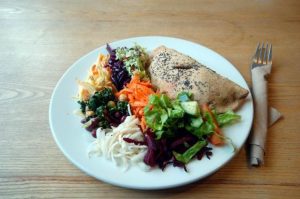 Current recommendations by the American Psychiatric Association and the American Dietetic Association suggests that recovering anorexics should eat about 1,200 calories per day – slowly increasing calories every other day – in hospitalized treatment settings.

Yet a new study published in the Journal of Adolescent Health suggests that higher-calorie diets can produce twice the weight gain of current recommended caloric intake for recovering anorexics. Not only that, but hospital stays were shortened by about seven days for anorexics who ate more calories than their peers.

The “start low and go slow” approach used by many hospitals and institutions aims to avoid refeeding syndrome – a potentially fatal condition that is caused by rapid electrolyte shifts. But Andrea Garber, associate professor of pediatrics in the Division of Adolescent Medicine at UCSF Benioff Children’s Hospital and lead author of the study, was one of the first to show back in 2011 that adolescents on these low-calorie diets had poorer health outcomes and longer hospital stays.

“That study showed that the lower-calorie diets were contributing to the so-called ‘underfeeding syndrome’ and are just too conservative for most of the adolescents that we hospitalize,” said Garber. “Now we’ve compared a higher-calorie approach and found that it dramatically increases the rate of weight gain and shortens hospital stay.”

Garber’s new study evaluated 56 adolescent patients who were put on higher-calorie diets of about 1,800 calories per day, increasing by 120 calories per day. All of the participants were young women with anorexia who required hospitalization for malnutrition.

When compared to adolescents who ate 1,100 calories per day and increased caloric intake by 100 calories per day, the former group gained about twice as much weight as the latter. Young women on the higher-calorie diets also were discharged earlier, without increased risk of refeeding syndrome.

“This higher calorie approach is a major shift in treatment that looks really promising – not only from a clinical perspective of better weight gain, but from the perspective of these young people who want to get better quickly and get back to their ‘real’ lives,” Garber concluded.